Each year, the Mastics-Moriches-Shirley Community Library celebrates the birthday of William Floyd (local hero & signer of the Declaration of Independence) with the school district that bears his name. Among the festivities planned would be a birthday cake baked by culinary students, essay readings and the display of student art. This year, however, the library’s 3D printing capability would add a new and exciting dimension to the celebration.

Several months ago, a gentleman walked into the library, up to the Reference Desk and nonchalantly placed a large plaster bust of William Floyd in front of Brad Shupe, our local history librarian. The gentleman was William Lauer, an artist and resident of the community. Rather hastily, he explained he wanted us to have it, offered his contact information and then left.

While William Floyd is locally famous, he doesn’t carry the name recognition of the Founding Fathers. As such, there simply isn’t a lot of items bearing his likeness, save for an odd portrait or two and, of course, Mr. Lauer’s bust! Reaching out to Mr. Lauer, we asked and received his permission to 3D scan the bust so we might create some tchotchkes for attendees of the celebration. Permission in hand, we began the process of digitizing the bust.

While the library was in possession of a 3D printer, we did not own a scanner. For that, I reached out to my colleague Chris DeCristofaro of the Sachem Public Library. Using a Next Engine 3D scanner, we spent the next several hours using successive scans to create a 3D rendering of Floyd. Chris then exported the file in STL format and emailed it to me. 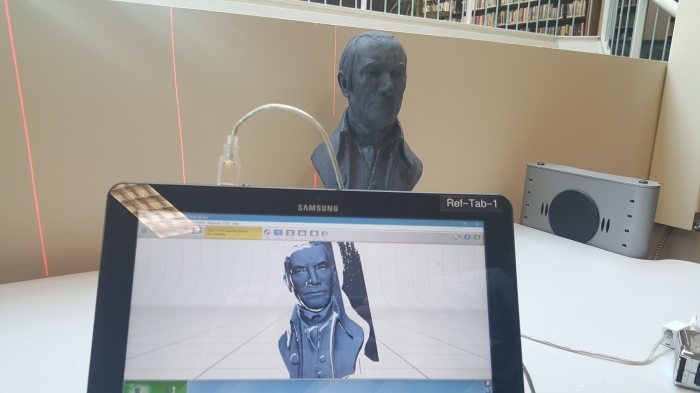 I next ran a full-size test print of the file using a Taz 6 printer, followed by a scaled down version, both of which proved successful.

It was now time to turn the bust into a keychain! Using TinkerCAD, I imported the STL file. After some simple resizing, I added a loop to the top of Floyd’s head to serve as a key ring. While the preference would have been the bottom of the bust, this would have required the use of more support structures, which would have to be cleaned off–easy enough for one or two prints, but we were planning on 150! 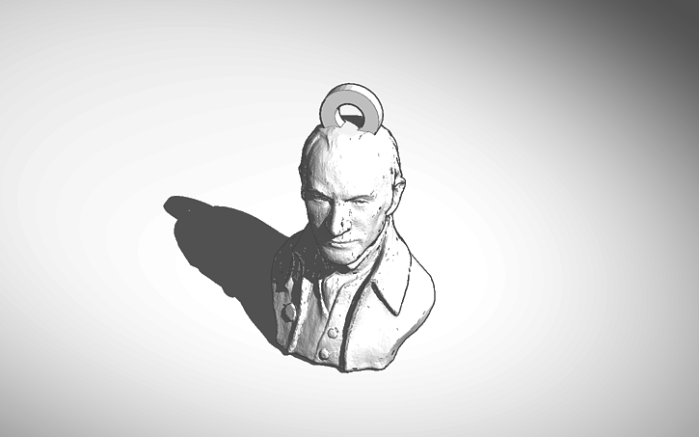 From TinkerCAD, we once again exported our keychain version of the STL file and placed it in Cura, the software that runs our printer. In Cura, we established a final size and infill percentage (how solid the object is). By managing the workload across two printers and printing multiple keychains for each job, we were able to hit our target in time for the celebration.

Ultimately, this project highlights several of the strong suits of 3D printing/scanning:

This site uses Akismet to reduce spam. Learn how your comment data is processed.